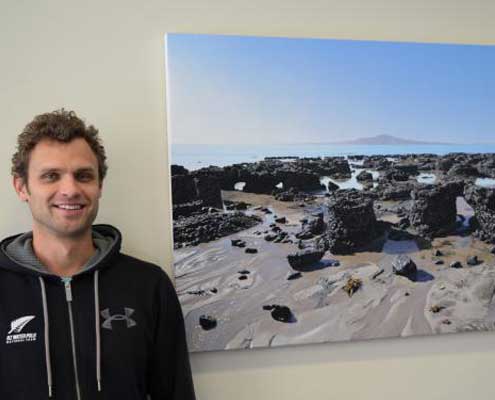 From the Rosmini Round Up

He says, “The Headmaster of Rosmini College, Nixon Cooper, contacted me about doing a painting for the school. We discussed what would be appropriate and then I went and took photos of the Takapuna Reef.” Matt says he enjoyed doing the painting as, “I don’t often paint this type of picture,” and he adds the highlights “were firstly going and getting the images and spending time around the rocks in Takapuna.”

Matt has a Bachelor of Sport and Recreation (AUT) and a Diploma of Fine Art (Whitecliffe). He has been a full time artist for a number of years and he has his own website – www.mattpayne.co.nz. Matt describes his art as “an expression of my love for my home. It is influenced by the beaches and the farmlands and the bushes of New Zealand. I love spending time outdoors and my paintings are an extension of that. I attempt to capture the feeling of the place in painting.”

Recalling his time at Rosmini College, Matt says, “I remember clearly the art room and the painting processes; they were, unsurprisingly, some of my favourite periods at school. I also have cherished memories of the P.E. periods and playing sports on the top field.” Matt also “played waterpolo since I was 10 years old at Rosmini and went on to represent North Harbour and New Zealand.”